Starting school is an exciting milestone for every child and parent. We understand that parents and caregivers have a choice when enrolling their children into school. Sawyers Bay School has an open door policy meaning that prospective families are always most welcome to come along and get a feel for the school.

We have a comprehensive programme of school visits that enables children of school age (5) to be introduced to the environment and routines of school. Feel free to contact us in advance of your child turning 5 so that this can be arranged in good time 4 to 6 weeks beforehand.

Feel free to contact the school to arrange a visit or for an enrolment pack. We’ll be more than happy to assist with any queries you have.

The School offers a range of ways to involve our pre-schoolers as they get ready for school.

Every second Friday (Dates can be found on the dates tab of this website) Papatuanuku hosts any four year olds that are getting ready for school between 1.15pm and 2.15pm.

We offer the chance for young children to take part in activities that are a step between pre-school and school. The programme is run by our New Entrant teacher and incorporates the New Entrant children.

If  you would like to come along, please let us know and we will be able to get you involved!

As the children enrolling in the school get closer to their fifth birthday, we provide classroom visits for them to gain experience in the classroom.

The number of visits that a child may have is all very dependent on the child themselves. Some children who may be a little nervous about starting school may need regular visits to become familiar with the space, the other children and the teacher, whereas children that may already have siblings at school and are more familiar, may only need a few visits to get them going.

Our Staff are very happy to talk parents through this and tailor the induction to suit the child. These visits also need to be scheduled so that we do not have large groups all at once. Please contact the office to book in a visit.

As well as our structured induction activities, we are always happy to have our community pre-schoolers getting involved with their siblings at the school. Whenever there is a community event, we often find that our pre-schoolers just muck in with the rest of us. It helps to give them a sense of place within their school and builds our community feel at the same time. In 2020, Sawyers Bay School will be offering 25 out of zone enrolment spaces.

1.    Applications for enrolment are to be submitted for consideration for all students (in-zone and out of zone) who wish to attend Sawyers Bay School.

2.    Applications for enrolment will be considered in accordance with the current legislation.

Description of the geographical area:

3.    The School’s home zone shall comprise:

Taking in both sides of all roads mentioned except where specified: 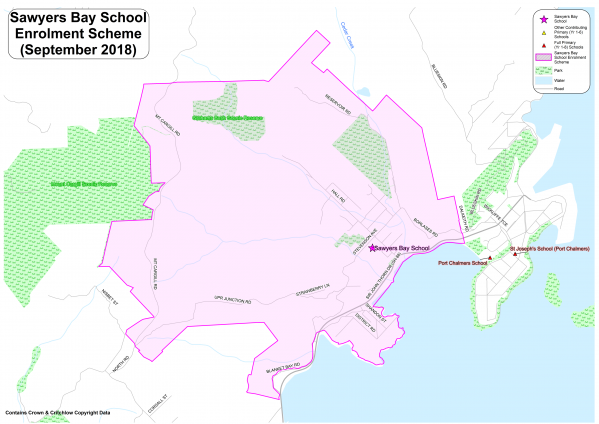 5.    Information detailing application deadlines and the date of any ballot will be widely advertised in advance.

6.    Pre-enrolment applications will be acknowledged in writing outlining the relevant processes.

7.    Where out of zone applications have had to be declined, parents / caregivers will have the opportunity to be included on a waiting list should places become available.

Should places be available for enrolments from outside the defined home zone, applications will be considered under the following priorities as defined in the Education Act:

i.          First priority must be given to students who have been accepted for enrolment in defined special programme(s) run by the school and approved by the Secretary for Education – there are no special programmes currently approved.

ii.          Second priority must be given to applicants who are siblings of current students.

iii.          Third priority must be given to applicants who are siblings of former students.

iv.          Fourth priority must be given to any applicant who is a child of a former student of the school.

5.         The school will adhere to the ballot dates for each following year as notified by the Ministry of Education.

6.         The Board will determine if additional ballot dates are to be set during the school year.

Get the SchoolAppsNZ Mobile App

Get the SchoolAppsNZ Mobile App